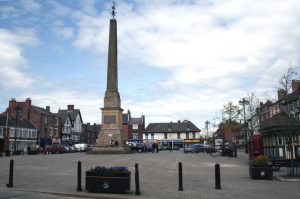 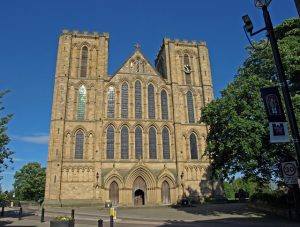 With a stunning gothic cathedral as its centrepiece, Ripon is an almost picture-perfect representation of what an English town should look like. Founded in the 7th century, its town centre has a harmonious and beautiful mix of architecture dating back to the medieval period, including its Georgian town hall and the Market Place, which has been there since the 12th century.

Ripon is in fact classed as a city due it having a cathedral, although it is far more town-sized, and is the fifth least populated city in the United Kingdom, with a population of around just 17,000 inhabitants.

The Ripon Cathedral we see today is the third version of the church built on the site. The original was built by Saint Wilfred around AD 672. This was almost totally destroyed by King Eadred in 948, leaving just the crypt intact. A Minster church was soon built on the site and that in turn was destroyed by William the Conqueror in 1069 during the Harrying of the North as he viciously tried to bring the unruly Anglo-Danes of northern England under his control. The third version was started by the first Norman Archbishop of York, Thomas of Bayeux, in 1160. For the next four hundred years it was added to, rebuilt and repaired until 1547 when Edward VI dissolved the college of canons and all revenues were appropriated by the Crown, leaving any new work that was planned undone.

Through all the building and destruction of the cathedral, the settlement of Ripon itself began to take shape. The earliest settlers were the builders of Saint Wilfred’s church, brought over from Lyon in France and Rome. During the Viking invasions and the Norman Conquest, Ripon managed to survive, although the populations were at times drastically reduced. By the 12th century, Ripon had built up a booming wool trade, aided in no small part to its proximity to Fountains Abbey, which had a long tradition in sheep farming and owned a vast amount of grazing land in Yorkshire.

The English Reformation under Henry VIII, badly affected Ripon, which like the rest of northern England, did not want to break with Rome. With the Dissolution of the Monasteries, Fountains Abbey was itself dissolved, leaving the old system in disarray. Ripon, however, found a new industry in the 16th century with the manufacture of spurs. King James I was given an expensive pair of these when  he stayed in Ripon in 1617.

During the English Civil War, Ripon remained loyal to the Crown but avoided the main part of the fighting, although there was skirmish in the Market Place in 1643 which the Royalist forces managed to win, even though the Parliamentary forces eventually won the war.

During the 19th century, Ripon somehow managed to avoid the worst aspects of the Industrial Revolution, even though there were several guilds of merchants and artisans in the town that could have promoted it. Ripon would have been a much different place if it had become more industrial.

If you are planning to visit Ripon after all that history, just walking around the town and visiting the cathedral is pleasant enough by itself. There are a number of other attractions in the town within walking distance of the centre, including the Prison and Police Museum, with costumed re-enactments from the 19th century and hands-on displays, and the Workhouse Museum, giving an accurate representation of the least fortunate of the town during the Victorian era, which is ironic considering the above statement about the Industrial Revolution.

Ripon Racecourse is just outside the town centre and has races and events throughout the spring and summer months. It is affectionately termed Yorkshire’s Garden Racecourse and has been open for racing on that site there since 1900.

If you want to make a day out of shopping, there is a market day every Thursday at Market Place with a large number of stalls of all kinds and open from 9am to 4pm.

In the surrounding countryside, near to Ripon, there are a whole host of places to visit. Four miles west of Ripon is Fountains Abbey and Studley Royal Water Garden. Already mentioned for its strong historical connection with Ripon, Fountains Abbey is the ruins of a Cistercian monastery found in 1132 and is now a World Heritage Site. Within the same grounds, Studley Royal Water Garden is just a short walk along the riverside path. An elegant water garden with mirror-like ponds, statues and follies, designed by John and William Aislabie in the 18th century, it is a great place to wander around for hours. The site has a shop, restaurant  and holiday cottages.

Four miles south-east of Ripon is Newby Hall and Gardens. It is an elegant Georgian house with 25 acres of award-winning gardens full of rare and beautiful plants. There is also an adventure playground, a miniature railway, a dollhouse collection and many other attractions.

Eight miles south of Ripon is Ripley Castle, a 700 year old castle set in beautiful walled grounds, with hothouses and a kitchen garden. It also has a deer park and lake. Guided tours of the castle are available, with its collection of paintings, fine china and furnishings collected over the long centuries the Ingilby family have lived there.

A town the size of Ripon has numerous places to stay and eat, and plenty of great and old public houses. If you want to stay somewhere steeped in history then The Old Deanery couldn’t be any better. At one time the deanery of the cathedral and dating back to 1625, it sits in the shadow of the cathedral and has 11 bespoke bedrooms, a restaurant and bar.

Every year in the summer there is a procession around the town in honour of Saint Wilfred, the founder of Ripon. It originated in 1108 when King Henry I granted the permission to hold a fair in the town to mark the saint’s birthday on the 30th July. The procession is led by actor playing Saint Wilfred on his horse, followed by decorated floats that make their way around Ripon. The procession is joined by the Ripon City Band, Morris dancers and city dignitaries, and has a commentary describing each float as it passes the town hall.

Welcome to Ripon local what's on now page. YorkshireDales.co.uk is trying to invest in the local community by giving every village an outlet to show the world what we are doing locally. For this section we are looking for all sorts of local information. For example it might include the following but we are happy to list lots more -:

Please send us details of any local information for Ripon - we will post them here.
Email us now...

Welcome to Ripon local information page. YorkshireDales.co.uk is trying to invest in the local community by giving every village an outlet to show the world what we are doing locally. For this section we are looking for all sorts of local information. For example it might include the following but we are happy to list lots more -:

Please send us details of any local information for Ripon - we will post them here.
Email us now...

Please send us details of any local travel information for Ripon - we will post them here.
Email us now...